HONORARY PATRON OF THE COMPETITION 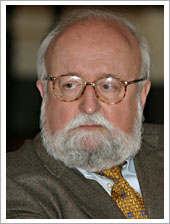 Born on November 23, 1933, in Dębica, Poland, Krzysztof Penderecki began studying composition under Franciszek Skolyszewski. He later studied at the Krakow Conservatory under Artur Malawski and Stanislaw Wiechowicz and graduated in 1958. He was then appointed as a professor at the Conservatory. Between 1966 and 1968, Penderecki was a lecturer at the Volkwang Hochschule für Musik in Essen, Germany. In 1968, he received a grant from the German Academic Exchange Organisation — DAAD. He was appointed rector of the Krakow Conservatory in 1972.

Krzysztof Penderecki’s first public appearance on an international level was in 1959 at the Warsaw Autumn Festival. There he performed Strophen, one of three works for which he received first prizes at the 2nd National Young Composers Competition. The other two works were Psalms of David and Emanations.

In 1959, he composed Threnody for the Victims of Hiroshima. For this, one of his best known and most often performed compositions, he received the UNESCO prize. This piece was followed by a series of success: in 1960 at the Donaueschinger Musiktage with Anaklasis, the following year with Polymorphia, Phonograms, and Psalm, and in 1966, St. Luke Passion, the first major work of his career. This piece was commissioned by the West German Radio in Cologne to celebrate the 700th anniversary of the Munster Cathedral in which the piece was first performed on March 30, 1966. On this day, Penderecki was reborn—the performance marked a turning point in his career making him the most acclaimed artist since Igor Stravinsky.

The following year brought the composition and performance of another major choral work, Dies Irae, known also as the Auschwitz Oratorio.

In 1968-69, Penderecki wrote his first opera, The Devils of Loudun, commissioned by the Hamburg State Opera where it had its world premiere in 1969. Since then, this work has been produced numerous times, has been broadcast, televised, and released on record.

Utrenya was Penderecki’s next major work. The first part of this composition, The Entombment of Christ, premiered at the Altenberger Cathedral in 1970; the second part, The Resurrection of Christ, premiered one year later at the Cathedral of Munster. He then wrote another oratorio work, written in 1970 for the United Nations, the cantata Cosmogonia. The premiere was marked by the presence of presidents, royalty, and prime ministers, and the piece was lavishly praised as a brilliant and extremely original work. In 1971 he composed the De natura sonoris No. 2 for Zubin Mehta. The work is based on a piece of the same title, composed in 1966.
In 1972 Penderecki began his conducting career. Since that year, he has been seen on the podiums of the most important orchestras of the world.

In the years between 1972 and 1978, Krzysztof Penderecki was a professor at the Yale University School of Music.

Penderecki completed his Symphony No. 1 in 1973 and personally conducted the world premiere at Peterborough in England. In addition, he composed Canticum Canticorum Salomonis. And he wrote Magnificat, one of his most important works for bass solo, vocal ensemble, two mixed choirs, boy’s choir, and orchestra. It was written to commemorate the Twelfth Centenary of the Salzburg Cathedral, and Penderecki himself conducted the world premiere at the Salzburg Festival in 1974.

Penderecki’s second stage work, Paradise Lost — the Sacra Rappresentazione is based on a libretto by Christopher Fry after Milton. It had its premiere at the Lyric Opera in Chicago on November 29, 1978. In January, 1979, Penderecki conducted a stage production of Paradise Lost at the Teatro alla Scala in Milan and, having been invited by Pope John Paul II, gave a concert at the Vatican. The world premiere of Penderecki’s Concerto for Violin and Orchestra No. 1 took place in Basle in April, 1977 with Isaac Stern as the soloist. Zubin Mehta conducted the first performance of the Symphony No. 2 in New York on May 1, 1980, and also at the Salzburg and Lucerne festivals while touring Europe.

Te Deum, written in 1979/1980 for solo, choir, and orchestra, was conducted by Penderecki at its world premiere in Assisi during the summer of 1980. In 1981, it was performed in New York, Berlin, Warsaw, and Paris. On January 11, 1983, Penderecki conducted the premiere of his Concerto for Cello and Orchestra No. 2, performed by the Berlin Philharmonic with Mstislav Rostropovich as the soloist. It was followed by the Concerto for Viola and Orchestra which had its world premiere on July 24, 1983 in Caracas and by the Polish Requiem. The Requiem had its premiere on September 28, 1984 and was commissioned by the Würtemberg Radio and State Theater to commemorate the fortieth anniversary of the end of World War II. This major choral work has been in the programs of international concert halls since its debut.

The world premiere of Penderecki’s third opera, The Black Mask, based on the play by Gerhart Hauptmann, was the focus of attention at the 1986 Salzburg Festival. It was immediately followed by performances in Vienna and the first U.S. performance took place at the Santa Fe Opera during the summer of 1988.
In March 1987 Penderecki’s Song of Cherubim for a cappella choir was premiered at a gala concert given in Washington D.C. on the occasion of Mstislav Rostropovich’s 60th birthday. Veni Creator, also for a cappella choir, was conducted by Penderecki himself when he received an honorary doctorate from the University of Madrid in April 1987. That same year, he received the Karl-Wolf Award from the Israel Wolf-Foundation.

In 1988 Penderecki received a Grammy Award from the National Academy of Recording Arts and Sciences for his Concerto for Cello No. 2, M. Rostropovich as soloist, and recorded by ERATO. In November 1989, Lorin Maazel conducted Penderecki’s Symphony No. 4, Adagio, commissioned by the French Government for the bicentennial of the French Revolution.

The premiere of Penderecki’s fourth opera, King Ubu (based on Alfred Jarry), took place on July 6, 1991 at the Munich State Opera.

The premiere of K. Penderecki’s Sinfonietta took place in Warsaw on February 16, 1992 with the Sinfonia Varsovia under the composer’s baton. This work was performed again in May, 1992 by the musicians of the Philadelphia Symphony Orchestra and, on the same day, in Seville during the World Expo ’92. Another recent composition, Benedicamus Domino, for a male a cappella choir was performed for the first time in April 1992 at the Easter Music Festival in Lucerne.

Penderecki’s Symphony No. 5 had its world premiere on August 15, 1992 in Seoul. In 1992 Penderecki finished his Flute Concerto dedicated to Jean-Pierre Rampal — the first performance by Jean-Pierre Rampal took place on January 11, 1993 in Lausanne with Orchestre de Chambre de Lausanne under the composer’s direction. In August 1992 K. Penderecki finished his BENEDICTUS for a cappella choir for Maestro Lorin Maazel. The premiere of Penderecki’s Sanctus, the final part of the Polish Requiem, took place in November 1993 with the Stockholm Royal Philharmonic.

In 1995 Penderecki finished his Violin Concerto No. 2 written for Anne Sophie Mutter. It was premiered in June 1995 In Leipzig with MDR Orchestra conducted by Mariss Jansons. December 1995 witnessed the premiere of Penderecki’s finished Symphony No. 3, performed in Munich with the Munich Philharmonic Orchestra under the baton of the composer.

In December 1996 Krzysztof Penderecki completed his new work, Seven Gates of Jerusalem, which will close the celebrations of 3000 years of Jerusalem. Its world premiere was held on 9 January 1997 in Jerusalem. In February 1997 he was awarded the Crystal Award in Davos, Switzerland. The world premiere of Penderecki’s Hymn to St. Daniil took place on 4 October 1997 in Moscow. The piece was commissioned by Channel Six of Moscow Television to mark the 850 years of Moscow. Penderecki’s Hymn to St. Adalbert was written to mark the millennium of Gdańsk and was premiered on 18 October 1997.

The world premiere of Penderecki’s Credo took place in July 1998 at the Bach Festival in Eugene, Oregon. The European premiere was held as part of the Krzysztof Penderecki Festival on 5 October 1998 in Krakow, Poland.

In 1999 Krzysztof Penderecki received two Grammy Awards for Best Classical Contemporary Composition, (Violin Concerto No. 2 – “Metamorphosen” performed by Anne-Sophie Mutter) and for Best Instrumental Soloist Performance (Penderecki Violin Concerto No. 2 under the composer’s baton). On 23 January 2000, Krzysztof Penderecki received the “Best Living Composer” award at the Midem Classic in Cannes and in October 2000 an honorary doctorate from the University of Luzern.

Penderecki’s Sonata for Violin and Piano was premiered by Anne-Sophie Mutter and Lambert Orkis at the Barbican in London on 29 April 2000. The Sextet, commissioned by the Musikverein, was first performed on 7 June 2000 at the Musikverein in Vienna by Mstislav Rostropovich, Yuri Bashmet, Julian Rachlin, Dmitry Alexeev, Radovan Vlatkovic and Paul Meyer.

In January 2001 he completed his Concerto Grosso for Three Celli which was premiered in June 2001 in Tokyo under the baton of Charles Dutoit by Boris Pergamenschikow, Han-Na Chang, and Truls Mørk. On 26 October 2001 the Jury of the Principe de Asturias Foundation awarded him the prestigious Principe de Asturias de las Artes Award 2001. On 7 December, Krzysztof Penderecki became an honorary member of the Hong Kong Academy for Performing Arts in Hong Kong. The Piano Concerto, commissioned by Carnegie Hall, was premiered on 9 May 2002 by Emanuel Ax and the Philadelphia Orchestra conducted by Wolfgang Sawallisch.

Penderecki was the principal guest conductor of the Norddeutscher Rundfunk Orchester in Hamburg and the Mitteldeutscher Rundfunk Sinfonie Orchester in Leipzig. In 1987-1990 he was the artistic director of the Krakow Philharmonic Orchestra and in 1992-2002 the artistic director of the Casals Festival in San Juan, Puerto Rico. In September 1997 Krzysztof Penderecki became the musical director of the Sinfonia Varsovia orchestra. From 1998, he is the artistic advisor to the Beijing Music Festival and from October 2000 guest conductor of the newly formed China Philharmonic Orchestra. Krzysztof Penderecki began his jubilee year 2003 by conducting a concert at the National Philharmonic in Warsaw with the Sinfonia Varsovia orchestra. The program included his Concerto grosso and Sinfonietta per archi and Dvořák’s Symphony No. 9.

On 19-20 June 2005 in Vienna, there was a premiere of Penderecki’s Largo for Cello and Orchestra, a work commissioned by the Musikverein and dedicated to Mstislav Rostropovich. It was performed by Mstislav Rostropovich and the Wienerphilharmoniker conducted by Seiji Ozawa. 26 June 2005 in Luxembourg saw the premiere of Symphony No. 8 (Lieder der Vergänglichkeit) for Soprano, Mezzo-soprano and Baritone with the EuropaChorAkademie and Luxembourg Philharmonic Orchestra led by Bramwell Tovey The piece was commissioned by the Government of Luxembourg to mark the opening of the new Josephine Charlotte Philharmonic Hall.

In 2005 Krzysztof Penderecki was awarded the Order of the White Eagle — Poland’s highest decoration and in 2006 he received the Three Star Order in Latvia.

In autumn 2007 the composer became the Honorary Professor of St. Petersburg Rimski- Korsakov State Conservatory and in 2008 — the Honorary Professor of Yerevan Komitat State Conservatory.
On 5 May, 2008 in Bremen Krzysztof Penderecki himself conducted the world première of the Concerto per corno e orchestra with the Bremen Philharmonic Orchestra and soloist Radovan Vlatković.